ITOps vs. DevOps: Overcoming the Conflict

ITOps and DevOps are technology management practices that have been around long enough that anyone in IT should have a good grasp of what they mean. Here’s our experts’ take on ITOps vs. DevOps.

ITOps vs. DevOps: What is ITOps? What is DevOps? How are they different? Ask a software development expert these questions, and no answer would be wrong. They’d just be different and grounded in each of these experts’ experiences as all DevOps teams are not the same. There are progressive DevOps teams that have a fully integrated stack view and absolutely see the downstream enterprise implications. And there are more traditional teams that are adopting agile and have implemented DevOps in small team structures and are looking to scale. And there’s also a hybrid of the two. We’re going to focus on the last two.

ITOps and DevOps According to Wikipedia

ITOps and DevOps: What Keeps Them Apart

When you understand the essence of both practices, the cause of the ITOps vs. DevOps conflict becomes clear. While ITOps takes a broad view of the entire technology landscape that your organization relies on to conduct its business mission, DevOps focuses on the task at hand. DevOps teams don’t always have the visibility or awareness of the downstream implications on the enterprise stack. (And this is where can modern ITOps team can help.)

That’s not a criticism of either ITOps or DevOps. It’s just the way it is under traditional IT operations management. And while the two disciplines should operate in a complementary manner, the reality is that IT environments are too often comprised of so many different elements—from on-premises legacy systems to cutting-edge cloud services—that IT management and cultural inertia keep the two apart. They are stymied by the same challenges that keep them occupied every day:

Data and Speed: The Heart of Conflict

What’s more, these problems and their underlying causes tend to become more acute in larger enterprises where the scale of technical heterogeneity is most evident. Why? Because DevOps teams tend to be small, agile, driven by innovation, and focused on addressing tasks in an accelerated manner. According to the Gartner report, “Don’t Fail Fast in Production; Embed Monitoring Earlier in Your DevOps Cycle,” agility is one of the top five objectives of DevOps. But DevOps teams aren’t trying to cause problems for ITOps. Their mandate for the project they are tackling at any time is typically aligned with a specific line of business.

Under traditional IT management, the data they rely on for their feedback loop is confined to the service or application they are working on. If there’s a downstream effect and they aren’t aware of it, they can’t address it. It’s up to ITOps to pick up the pieces. As the enterprise integrates more advanced technologies like cloud, microservices, containers, virtual storage, and other software-defined elements, the problem only worsens as the infrastructure managed by ITOps draws closer to the world occupied by DevOps.

This is what is at the heart of the ITOps vs. DevOps conflict. And resolving that conflict requires a fundamentally different approach to ITOps. With low-code application development platforms firmly in place, DevOps has become faster in delivering business applications. And the challenge to ITOps is to keep pace with the speed of business.

DevOps and ITOps, Unified by Data

How do we get there? It starts by providing both the ITOps and DevOps teams with precise, complete, real-time, contextual data drawn from a data lake, under a common data model. When trustworthy data is the foundation for decision making, and when that data is available in real time, it allows the DevOps team to operate with a feedback loop that lets them know how the decisions they make may affect other aspects of the enterprise. And when the DevOps team pushes their code out into the enterprise, it means ITOps knows about it when it happens and understands how those changes affect all associated downstream functions.

With a common data model, sources of data can be captured and enriched between platforms across the entire IT ecosystem, ensuring continuity, enhancing automation, and creating sources of trusted data that can be leveraged by DevOps teams. Then, when the DevOps team pushes their code out into the enterprise, ITOps knows about it when it happens and understands how those changes affect all associated downstream functions.

That kind of environment requires that enterprises evolve from traditional ITOps and adopt IT operations management powered by artificial intelligence, or AIOps. In fact, according to the Gartner report, “Augment Decision Making in DevOps Using AI Techniques,” DevOps teams that leverage AIOps platforms to deploy, monitor, and support applications will increase delivery cadence 20% by 2022. AIOps is architected to support the direction of today’s cloud-native enterprises as well as those enterprise environments that are highly hybridized, containing both on-premises legacy systems and cloud and virtual components.

The fact is, the success of DevOps (and IT management’s frustration with DevOps) has put the ITOps vs. DevOps debate in stark contrast, showing the need for a shift from legacy ITOps to the current AIOps model. When you have a management platform that is intelligent enough to identify all the components of an enterprise’s infrastructure, fast enough to map their activity in real time (including ephemeral, on-demand services that may blink in and out of existence), and is able to unify all the disparate sources of data in a single model, you are able to support both ITOps and DevOps faster and more efficiently. That’s because smarter IT needs trusted data and getting that data to where it is needed, when it is needed, is foundational to the success of both camps.

And even if the unexpected happens, the time required to resolve any resulting issues will be minimized because ITOps has the necessary visibility and contextual information to diagnose and fix the problem. AIOps can even lead to the implementation of autonomous problem resolution. That is the gap that AIOps can close. 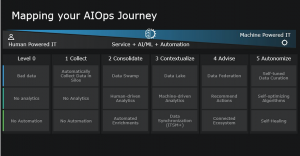 Our SL1 AIOps platform is powered by machine learning algorithms that enable you to discover all the components in your enterprise and collect their data under a single data model that contextualizes the resulting information and uses it to enable informed decision-making. That means you’ve got the means to not only overcome these challenges, enabling you to improve management efficiency today, but you can also put your enterprise on the path to true IT automation.

If you’ve been struggling to end the conflict and bring ITOps and DevOps together, take comfort in knowing you aren’t alone, and that there’s a solution. In the process of closing the gap between ITOps and DevOps, you may also find that you’re able to solve other persistent IT operations challenges. ScienceLogic would love to help you if we can.

Ready to learn more about how AIOps can help ITOps & DevOps teams? Read this eBook>

PREVIOUS POST
News Roundup, March 26, 2021: What’s Happening in AIOps, ITOps, and IT Monitoring
NEXT POST
SL1 Colosseum V2 Release: Another Step Closer to Intelligent Operations & AIOps
Our website uses cookies to improve your experience. By using our site you agree to our use of cookies.
Read MoreCookie settingsACCEPT